As a cigar enthusiast I’ve always been intrigued by famous cigar smokers of our generation, and world history. I wanted to highlight five of the most influential people who has enjoyed a cigar lifestyle in which many of us can relate, and in some cases come to envy.

George Burns is one of the most famous cigar smokers, and aficionados of all time.  He was a known comedian, actor, singer, and writer who began his entertainment career in the early 1920’s.

In an interview with Cigar Aficionado magazine in 1994, Burns joked the had begun smoking cigars at the age of 14 because he thought it made him look successful at such a young age.

As a stand-up comedian, George Burns was famous for his trademark cigar punctuation on stage. In my biased, but humble opinion, it is the most memorable stage prop of all-time by a performer.

The perfecto-shaped El Producto Queen, was George Burns’ cigar of choice.which he would purchase for as cheap as 5-cents, per cigar.  The El Producto Queen is still manufactured today and retail for a little under $1 at online cigar shops.  You can find great deals on all El Producto and other top brand cigars at Cigardealfinders.com.

In the same Cigar Aficionado interview, he stated that he preferred to smoke the El Producto because it was smooth, flavorful, and burned great, opposed to Cuban cigars that were packed tightly and would often burn out on stage.

John F. Kennedy, affectionately known as the 35th President of the United States, continue to rank highly in the history of presidents. He was popularly known for many exceptional accomplishments in office, but none other than having the most beautiful side piece in American history (Marilyn Monroe), and being an avid, famous cigar smoker.

As one of America’s most famous cigar smoking statesmen, JFK’s favorite cigar of choice was the H. Upmann, Petite Upmann of Havana, Cuba. The H. Upmann company boasts that over 300 pairs of hand touches each and every single cigar, so all hail those who are lucky enough to get their hands on these pre-embargo beauties.

As the story goes, the night before JFK was to sign the trade embargo with Cuba, he sent his press secretary (Pierre Sallinger) to scour the earth (actually, every cigar shop in the Washington D.C. area) to buy as many of the coveted H. Upmann Petites as he could possibly collect. In the end Sallinger was able to round up over 1,200 Petite Upmanns for the President.

Only after Sallinger had confirmed completion of his special mission to the President, did JFK move forward to sign the trade embargo with Cuba on October 19,1960, prohibiting most exports from Cuba into the United States (inclusive of tobacco and alcohol).

One the world’s most famous cigar smokers and British statesman, Winston Churchill, discovered his love affair with cigars visiting Cuba as a war correspondent in 1985.  While covering the rebellion against Spanish rule, he had collected 3,000- 4,000 cigars which he had housed in a room adjacent to his study at his home

As Prime Minister during World War II, Churchill was fitted for a special oxygen mask so he could continue to puff away on his favorite smokes in high altitudes in flight, tucked away in a 15-sq ft flight cabin.

He was known to smoke 8-10 cigars per day, although he would not continuously smoke, but let the cigar burn more to nub so he could chew on them.  There are few photographs that exist of Winston Churchill that do not include a cigar purged between his teeth, or sandwiched between his fingers.

Winston Churchill smoked many cigar brands but the Romeo y Juliet and La Aroma de Cuba, both of Havana, Cuba were his preferred choices.  These Cuban brands are still manufactured in Cuba, their owners moved on to produce their brands from the same Cuban seed in the Domican Republic (Romeo y Juliet) and Nicaragua (La Aroma de Cuba).  Great deals on these cigars and many other top brands can be found at online cigar shops such as Cigardealfinders.com.

Austrian born professional body builder, Arnold Schwarzenegger rose to American Hollywood prominence as one of the most accomplished action film stars of our time. His catalog include films such as the Terminator Franchise, Predator, and True Lies, to name a few.

Schwarzenegger was introduced to cigars through then girlfriend, Maria Shriver’s dad, Sargent Shriver. We also know Maria Shriver to be the sister of John F. Kennedy, the 35th President of the United States, and one the famous cigar smokers covered in this article.

With his connection to a political family and being a proclaimed Republican, Arnold Schwarzenegger quickly took to politics, serving two terms as California governor (2003- 2011).

While in office, Arnold had huge tent built 20-ft from the building where he would have lunches and hold meetings so he could enjoy smoking cigars.  This was to comply California’s strict smoke laws.

As an actor, Arnold Schwarzenegger was known to smoke cigars on movie sets, often to the objection of co-stars such Jim Belushi, Danny DeVito, and Carl Weathers. Conversely, Belushi and DeVito quickly converted to cigar aficionados themselves.

A famous cigar smoker of two cigars per day, Schwarzenegger favors Cohibas, Punch-Punch, and his ultimate favorite cigar which is the Partagas Series D (No.4) of Cuba. He often does live interviews where he professes his passion for cigars, and famously offered Jimmy Falon his 5 Rules of Smoking a Cigar for Beginners. Below are his rules:

Six-time NBA champion, Michael Jordan is highly regarded as the greatest basketball player, and one the best athletes of all time. After winning the 1991 championship, Jordan was introduced to cigars by owner Jerry Reinsdorf who handed him a stogie after the won the Finals, but this would not hook him just yet.

Jordan was again  introduced to rum dipped Churchills from Las Vegas, by longtime friend and broadcast extraordinaire, Ahmad Rashad.  Jordan would still not become a famous cigar smoker just yet, as he would only chew the Churchills because he felt that helped him relaxed.

That next season, Jordan expressed the frustration of hour and half long drives to the stadium for home games. It was then he began smoking a cigar on the way to the game. Yes!! It would become ritual for Michael Jordan to smoke a cigar in traffic, traveling to every home game.

Today, it has become more common to see a photo being produced with Michael Jordan sporting a premium cigar (often Cuban), either walking some of the most pristine golf courses in the country or lounging at his new $12.4 million residence in Jupiter, Florida, which has been constructed to handle and immense amount of cigar smoke.

For years, Micheal Jordan would never divulge how man cigars he smoked in a day, but in the October ’17 issue of Cigar Aficionado, he intimated to owner Marvin Ranken that he smokes six cigars per day. Like many famous cigar smokers, Jordan prefers many of the Cuban brand cigars, in which his favorite cigar is the Partagas Lusitanias of Havana, Cuba.

We took a look at five of the most famous cigar smokers of our time. I always find it inspiring to read or hear some of the great cigar stories from some of the most accomplished people. As a cigar enthusiast we all have a common bond with cigars that makes this lifestyle fulfilling and a lot o fun. So if you run into a famous cigar smoker, I encourage you to attempt to get a great cigar story out of them, but first adhere to these five rules. 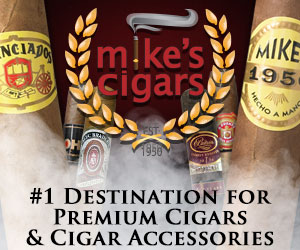